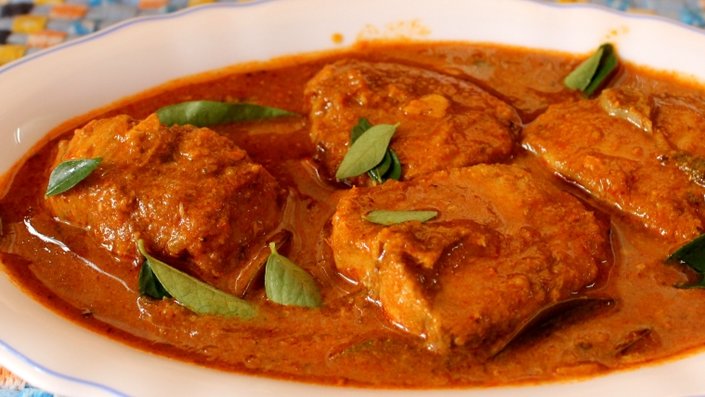 The fish curry that kills. Honoured to have yet another poem at Duane’s PoeTree! Thanks a lot Duane Vorhees.

GloMag is the coming together of writers in their diverse manifestations, thoughts, and expressions, and the visual interpretation of these. Sometimes the original thought of the writer gets completely lost in the interpretations. Visual aids help us to decipher the writer’s intentions, and at the same time, enhance the reading experience – page 232

My sincere thanks to the Autism for Help Village Project Trust and The Significant League for appreciating and recognizing my poems with this award. I am truly humbled and honored to receive it and dedicate it to my Dad who moved on in December and will be forever missed
-Reena Prasad

{Ampat Koshy
April 12 at 5:24pm · Jizan, Saudi Arabia
Unveiling the last prize for this year in the Reuel International Prize series 2018 for POETRY which goes to Reena Prasad 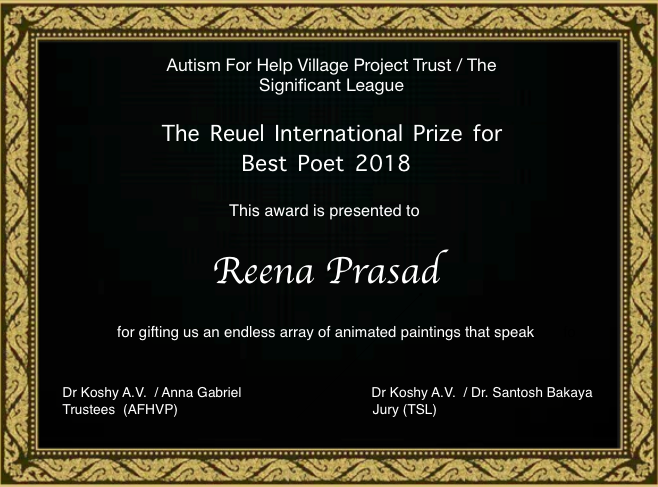 Ampat Koshy is with Reena Prasad.
January 25 · Jizan, Saudi Arabia
The Reuel International Prize is now in its fourth year and being started in a way by two poets is primarily a poetry prize.

Each year the poets who won have written an acceptance speech.
The speeches were memorable when penned by writers now looming large on fb and other places all over the world in the published arena and included ones by

This year’s winner hands down is Reena Prasad. Her speech is no less memorable.

Here is her acceptance speech on getting the Reuel International Prize for Poetry 2018. It is short, bittersweet and apt and will go down in the annals of speeches as a memorable piece of writing in itself that also neatly illustrates why she got this illustrious prize automatically. The interesting thing about these acceptance speeches is you have to hear them in your mind and they sound sometimes different, if not always better than when spoken, for that. To the speech per se without further ado.

“It has taken me some time to come to terms with this award. It has come to me at a bleak time when I am grappling with the bewilderment of being a fatherless daughter, forced to confront the concept of mortality. It is a bitter-sweet gift; the first thing I thought was that there is a spark missing, the lack of a vibrant soul who would have rejoiced with me at this recognition.
All the years I have been writing poems, I have done so with no intent other than the pleasure of the process. At first, it was the joy of having a private universe that one could saunter in and out of but till now the addiction to seeing thoughts settle into curious, weird and beautiful shapes and creating their own worlds of varying proportions continues. Like a dog given a bone, I have enjoyed the flavour, the smell, the gnawing, the feel of breaking into something, the beauty of burying and the renewed vigour in retrieving it. In this process of muttering and growling to myself, I have chanced upon similar people holding on to even more worn-out bones and together we have journeyed rejoicing in our strange ways. It might seem inconceivable or unforgivable to many who know us or live with us, that this ‘futile’ pursuit of ours, that yields certainly nothing in the form of monetary benefits yet consumes entire lifetimes, is done for its own sake, for the sake of the process alone.
I write because that is what I can do. There is nothing conditional about it- no publisher looming, no social causes to pursue, no magazine editors waiting, no religion or cause to further and no political fervour to nurture. The product may be accidentally social, the process is not.
To be given an award for doing what I love is exhilarating. It sets me free to walk my path, makes on me no demands except that I work a thousand-fold more at my poems and strive to keep the bar up at all times.
Coming from that very planet that I haunt, from people of my ilk, The Rejected Stuff( The Significant League) and The Autism for Help Village Project, The Reuel Prize matters immensely.
I am grateful for being selected for this award and I salute all the talented poets who have received it earlier. A big thank you to all my readers, friends, publishers, Dr. A.V Koshy, Anna Gabriel Koshy,( Autism for Help Village Trust), the indefatigable Dr.Santosh Bakaya (TSL) and to dear Reuel.

I dedicate this award to my Dad, who taught me to read and write good English.”
-Reena Prasad

Thank you Raamesh Gowri Raghavan for including ‘Strings’ in Narrow Road. An amazing issue. 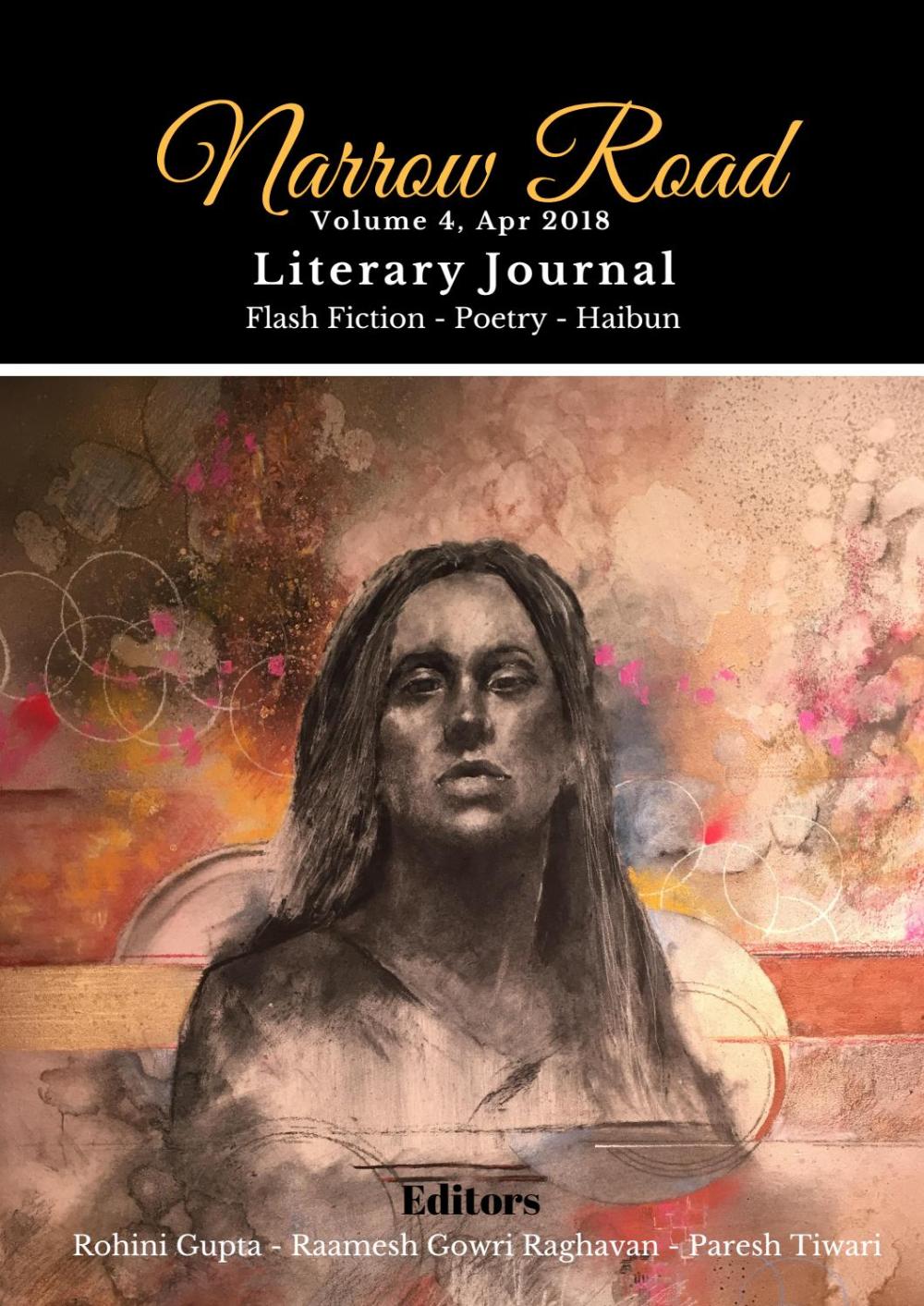 Very happy to be a part of GloMag March 2018. Thank you Glory Sasikala for yet another brilliant issue! Much gratitude to dearest Aruna Edula for the image.
Of Gates, Goats and Roses is on pages 77-78

GloMag is the coming together of writers in their diverse manifestations, thoughts, and expressions, and the visual interpretation of these. – page 76 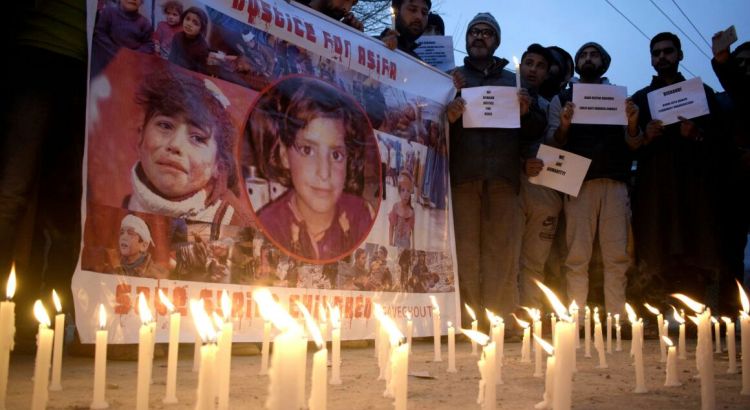 She speaks from my womb Last time it was her entrails yelling having been pounded, wrung and spread out to die in wide eyed surprise at yet another killing

Source: A Thousand Deaths And Still She Asks – Countercurrents